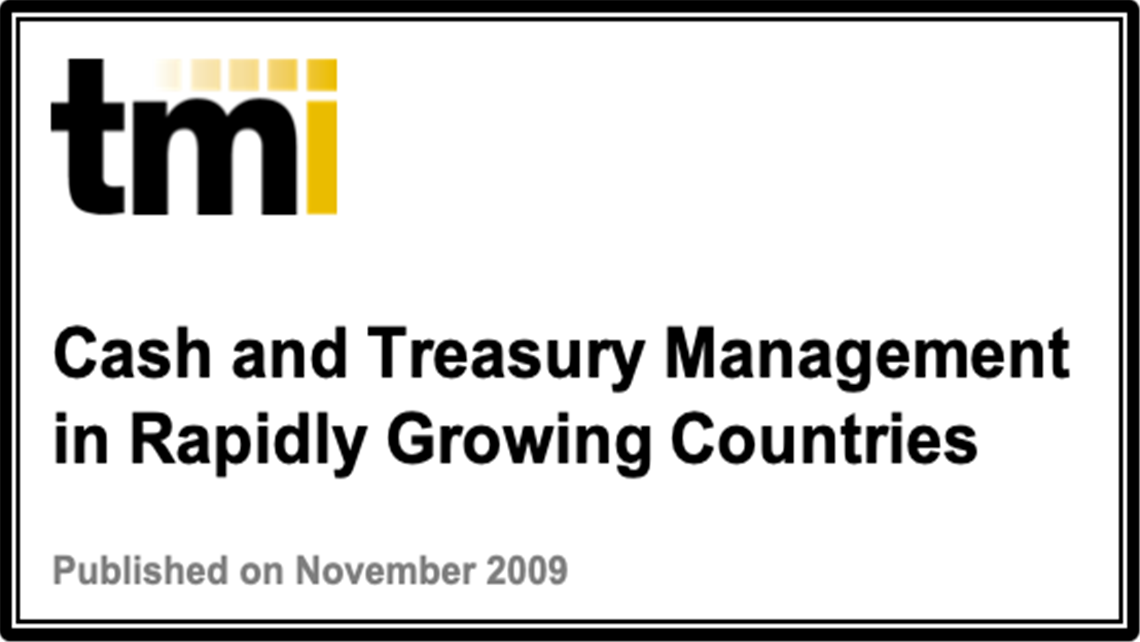 In this article we are looking at some of the issues that treasurers dealing in the newer, rapidly growing economies, such as in Asia, Central and Eastern Europe and the Middle East. Published on Treasury Management International Magazine on November 2009.

Companies are taking a holistic view of risk, including liquidity risk and counterparty risk, in some cases for the first time.

In the last two editions of TMI, we have been pleased to feature the 3rd BNP Paribas’ Cash Management University, which takes place on 8 – 9 October 2009 in Paris, France. This year, the event will focus on two of treasurers’ most important priorities: liquidity and risk. In the third article in this series, we preview another of the workshops that will take place during the event, looking at some of the issues for treasurers managing cash and treasury in the newer, rapidly growing economies, such as in Asia, Central and Eastern Europe (CEE) and the Middle East.

The economic crisis has hit every region in the world, and consequently, many of the challenges that have emerged as a result of the crisis are common to all companies. For example, multinational corporations, wherever they are headquartered, are seeking to maximise visibility and control over global cash, and ensure that as much cash as possible can be mobilised to meet financial obligations and external borrowings reduced. Companies either based in, or operating in rapidly growing economies, such as in parts of Asia, the Middle East and CEE, are no exception. As Soo Tat Kua, Head of Cash Management, Asia, BNP Paribas explains,

“Companies throughout the rapidly-growing economies are prioritising working capital improvements and risk management. In the former instance, there is an increased focus on gaining visibility over cash and increased efficiency, as well as a greater focus on banking and account consolidation and reviewing banking relationships.”

However, despite similar priorities, the tools that are available to these firms to deal with the crisis are not always the same as those in Western Europe and North America.

The crisis has accentuated the need for a robust approach to risk management, including liquidity risk and counterparty risk which have perhaps been less of a priority than other types of risk, such as interest rate and FX risk management. As Andrew Woods, Group Vice President, Treasury Solutions, SunGard AvantGard explains,

“The past two years have witnessed extraordinary events and companies globally have established similar priorities to deal with the crisis. Risk management is a crucial theme, particularly in regions such as Asia which have had less of a focus in this area in the past. Companies are taking a holistic view of risk, including liquidity risk and counterparty risk, in some cases for the first time. A prerequisite is to achieve transparency over information so that treasurers and CFOs have an accurate view over the company’s cash flow and exposures.

The introduction of FAS 133 and IAS 39 accounting standards led many firms to reduce their use of derivatives to hedge their risk. Today, we are seeing an increase in the use of hedging products both by companies that have used them in the past, and by those that are using them for the first time, particularly in emerging markets.

Measuring and monitoring risk, and valuing derivatives, requires specialised software that is well-known to many companies in Europe and the United States, but is less familiar in less mature markets. Consequently, we are seeing substantial growth in regions such as the Middle East, where we have operated for many years, and in parts of Asia, such as China where we have an established presence.”

Many multinational corporations have been very successful in centralising cash flow in Europe and North America, with wellestablished tools and techniques for optimising liquidity, and an increasing number of firms are taking advantage of these opportunities. As companies turn their attention to optimising cash flow in emerging economies, there is a more complex range of challenges. For example:

􀀀 Regulatory, legal and currency restrictions make it more difficult to implement techniques that are familiar in other regions, such as notional pooling;

􀀀 Companies may have multiple banking relationships, complicating efforts to centralise cash flow. In some cases, local banks in rapidly-growing economies will not have the infrastructure to support some of the liquidity management and connectivity techniques such as SWIFT corporate access that their multinational corporate clients may require;

􀀀 Large regional companies, such as in the Middle East, have focused on business growth in recent years rather than cash and treasury management. Consequently, as Andrew Woods explained earlier, the treasury organisation, processes and technology may not be as efficient as they could be;

􀀀 In regions such as the Middle East, there can be complications in terms of company ownership, such as requiring local sponsorship and ownership of 49% by a local entity in some countries and in some industries.  This can be a considerable barrier to cash pooling, particularly as the legal framework is often not sufficiently mature to support financial activities sufficiently. In these situations, it is frequently advisable to avoid including these joint venture entities in cash pooling structures to avoid legal complications in case of dispute, but of course this compromises a company’s liquidity management objectives.

“We wanted to integrate our emerging markets activity with our major markets, but the instruments we wanted to use were not necessarily available, in addition to the challenges of diversity across countries, technology limitations amongst banks in some regions, and regulatory and legal restrictions. Therefore, we needed to establish a new set of products that would allow us to satisfy our liquidity objectives whilst working within the market constraints.

For example, we work with small distributors and dealers in countries such as Russia, Poland and other parts of CEE. We wanted to balance our own cash flow needs with those of our distributors. We worked closely with our banking partners and created a hybrid solution that combined characteristics of direct debits, card payments and guarantees. The solution has now been in live operation for the past two years, which has been fortuitous as it has helped to regulate our distributors’ cash flow during the crisis.

In many countries, techniques such as notional pooling are not feasible. We wanted to integrate our cash from all countries into a single liquidity framework so that we could smooth the effects of income volatility by netting deficits in some countries against surpluses in others. Once again, we have worked with our banks to create innovative products to meet these objectives. We now have a hybrid product that combines elements of notional pooling and cash concentration that allows us to pool our cash within our global liquidity framework, including countries such as Russia, Turkey, Poland, Czech Republic and Hungary. A third solution has been a supplier financing arrangement to help support our suppliers in rapidly-growing countries and therefore increase the resilience of our supply chain, whilst not compromising our own cash flow.

Some of the products we have worked to devise with our banking partners are still new, and indeed Indesit has been the first company to implement one of these solutions, which will be in use by November 2009. Although these products are not yet well-known, there are considerable benefits for multinational corporations with similar needs.”

Although the crisis has been truly global in its nature, some countries, such as the Gulf States, have seen less of an impact than others. The same applies to countries such as China and India where the rapid growth of earlier years has slowed but not reversed. Consequently, multinational companies have focused more of their attention on those countries whose economies have continued to grow during the crisis, leading to a greater demand for cash and treasury management services in these regions. Furthermore, regional companies headquartered in these countries, or with significant operations there, are seeking to leverage their strengthening position compared with their foreign peers, and become more competitive in new regions. While the crisis has challenged every organisation, the long-term impact on companies based in, or with substantial operations in the rapidly emerging economies is likely to be positive, with a greater focus on cash and treasury management, better risk capabilities and steady long-term growth. Soo Tat Kua, BNP Paribas concludes,

“In terms of this crisis, the worst is probably over. There is a pick-up in production, and the corporate and consumer sentiment has greatly improved. The region’s stock indexes, such as Japan’s Nikkei, Hong Kong’s Hang Seng and Shanghai’s indexes, all have grown by more than 40% and have outperformed the Dow Jones. Having said that, I expect the recovery to be sluggish, keeping in mind that there is rising unemployment, which will definitely weigh on the recovery of the global financial markets. In comparison with the US and Europe, optimism is much greater in the emerging economies.”

This workshop is one of a comprehensive selection during the Cash Management University. The event also comprises plenary sessions led by expert commentators, panel discussions and a wide variety of practical, indepth corporate case studies.