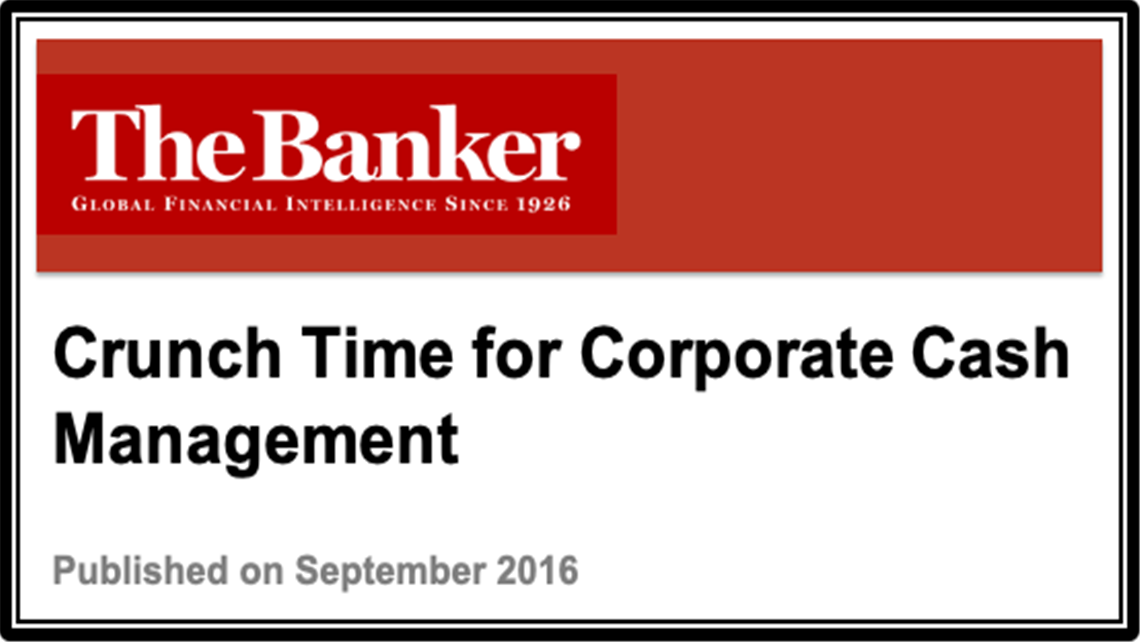 Contributed on joint article about how negative interest rates and regulatory changes are forcing corporates to rethink their liquidity management strategies, as the old ways of working struggle to cope in such unprecedented times. Published on The Banker on September 2016.

Negative interest rates and regulatory changes are forcing corporates to rethink their liquidity management strategies, as the old ways of working struggle to cope in such unprecedented times, writes Joy Macknight.

The Royal Bank of Scotland (RBS) entered unchartered territory for a UK bank in July when it told business customers it might start charging for cash deposits if the Bank of England (BoE) cut interest rates to below zero. Although BoE governor Mark Carney has repeatedly ruled out negative rates, the Monetary Policy Committee edged closer in August when it cut the bank rate to 0.25%.

When its letter to clients became public, RBS released a statement saying: “We will consider any necessary action in the event of the BoE base rate falling below zero, but will do our utmost to protect our customers from any impacts.” It added that there were no current plans to pass negative rates through to personal or business customers.

Opening of the gates?

This pass-through to corporate clients has not been in evidence in much of Europe, despite a number of the region’s central banks – most notably the European Central Bank and the Swiss National Bank – having strayed into negative territory a few years ago. While some banks are charging other financial institutions for deposits, there is concern that RBS’s move might open the floodgates to adopting a similar course with corporates.

Corporates are right to be watching with trepidation. The threat of charging for deposits comes at a time when they are holding more cash than ever before: an estimated $1600bn in the US, $2200bn in Europe and $2000bn in Japan.

RBS’s warning is indicative of the extraordinary environment in which corporates find themselves. In addition to paying a levy on cash deposits, new regulation under Basel III will also make it less likely that banks will accept them in the first place.

The Basel III liquidity coverage ratio (LCR), which requires banks to have sufficient liquidity to survive a 30-day stress event, differentiates between types of bank deposits, favouring highquality liquid assets (HQLAs), or ‘sticky’ deposits. Under the LCR, only deposits used to support business operations, such as payroll and payments, are deemed as HQLAs. ‘Non-operating’ cash is no longer attractive to banks.

“Basel III’s LCR changes the transaction banking equation,” says Lisa Rossi, global head of liquidity and investment products at Deutsche Bank. “In order to adapt to this new world, treasurers must take a more tactical approach to liquidity management and to their banking relationships.”

To help corporate treasurers understand the changing dynamics of deposits, the bank’s global transaction banking unit has produced a white paper entitled 'Liquidity management: thriving in a new world', due for release in mid- to late September.

According to Ms Rossi, weathering the storm will mean exploring all available alternatives. “The old approach of leaving cash on account is no longer viable, and treasurers need to optimise their balances with more care and sophistication,” she says.

“Treasurers should revisit a number of areas, such as cash forecasting, in order to see where they can term out deposits. For example, a 30- or 60-day term deposit is more valuable to a bank,” she adds. “But improving cash forecasting necessitates having a better understanding of a company’s payment flows.”

The LCR is just one aspect of Basel III – ostensibly a banking regulation – that is having a knock-on effect on corporates. In addition, the leverage ratio (LR) framework is creating confusion in the market regarding how the associated rules will effect notional pooling, a liquidity management tool that helps treasurers gain the visibility and control over cash flows that Ms Rossi recommends.

Effective in 2018, the LR limits the amount of risk a bank can absorb based on its Tier 1 capital. In April, the Basel Committee proposed that balances in notional pooling should be reported gross, instead of net as was the practice previously. This was the first time the committee specifically singled out notional pooling, which made both banks and corporates take notice.

Jennifer Doherty, global head of commercialisation, liquidity and investment products at HSBC, explains how the change will affect a bank’s risk evaluation. “If there is a short position within a notional pool, then a bank can net that from a balance sheet perspective but not from its exposure,” she says. “As a result, this negative balance is consuming the bank’s total available exposure, which means it has an implicit cost of capital.” This may increase the cost of providing notional pooling, making it less profitable for banks to offer it to corporate clients.

During the Basel Committee’s consultation period, a number of industry bodies, including the Global Financial Markets Association, lobbied against the proposed change. In a joint letter published on July 7, the associations said: “[Corporates] benefit from notional pooling due to reduced liquidity management and operational burdens. If [reporting net] is not recognised in the leverage ratio, clients that use these structures would have to absorb higher operational costs or fundamentally change how they operate and manage cash.”

An end to notional pooling?

While the demise of notional pooling has been foretold for a few years now, most agree that there is life in it yet, mainly because it plays a useful – and in many ways unique – role in corporate cash management.

For example, corporates use notional pooling to deploy liquidity across various operating entities to minimise external funding costs, explains Suzanne Janse van Rensburg, regional head of liquidity for global transaction services, Europe, Middle East and Africa, at Bank of America Merrill Lynch. She has seen the demand for notional pooling increase since the global financial crisis in 2008 when credit effectively dried up, making it more important for large corporates to be able to self-fund.

Notional pooling circumvents more complex internal accounting regimes seen in physical cash pooling. Because there is no actual transfer of funds, each of the participating entities keep their own balances and intercompany loans are avoided. Instead, the parent company sets up cross guarantees with its bank.

The lack of a physical sweep is valuable in organisations where subsidiaries want to maintain autonomy but central treasury wants to maximise the benefits of being part of the same group, according to Jan Rottiers, head of liquidity management products at BNP Paribas. In addition, notional pooling is a good mechanism for covering temporary shortfalls in specific currencies without going through foreign exchange transactions or swaps, both of which incur costs.

Mustafa Kilic, chief financial officer at Groupe SEB, a French appliance consortium, is a proponent of notional pooling for all of these reasons. “A company can maintain local relationships with a bank, which is important especially in difficult markets,” he says. “It also allows a company to optimise liquidity and cash without converting currencies. This is important as foreign exchange hedging instruments are not available or affordable in every currency pair.”

However, as the effects of Basel III become clear, as well as more stringent tax (such as US Reg 385) and accounting (such as IAS 32) regimes, some banks are increasing the price of notional pooling to cover their extra costs, while others have exited the product altogether.

BNP Paribas, for one, plans to continue to offer notional pooling and is considering whether to pass the costs onto its clients. “We need to find a new break-even point – it needs to be sustainable for the bank to continue to offer the product and it must still add value for the customer compared with other solutions,” says Mr Rottiers.

Of those planning to stay in the game, many banks have become more selective as to whom they offer notional pooling. They are weighing up the overall customer relationship, rather than whether or not it stacks up as a standalone product.

Société Générale will neither increase price nor limit its offering, but wants to expand notional pooling in order to capture a greater portion of the large multi-national customer base, says Benoît Desserre, global head of payment and cash management. “We want notional pooling to remain and be applicable for those corporates that need it. Although it can’t be as profitable as it was yesterday, we appreciate that the corporates using notional pooling today are the largest and most important of our client base.”

However, Sabrina Wong, head of treasury, UK, at global insurance broker Willis, notes that the changing regulations and their potential impact on notional pooling may make it less likely that corporates will incorporate it in their future cash management structures. “Corporates need to ask themselves if notional pooling is worth the set-up cost when it’s uncertain where it is going from here,” she says.

What are the alternatives?

Ms Doherty reports a general trend away from notional to physical cash pooling, partly as a result of regulatory changes but also because corporates are more willing than ever to embrace automation. “The good thing about physical cash concentration is that it is easier than ever to automate the movement of cash without introducing onerous, manual and time-consuming intercompany loan management, as banks can now do it for them,” she says.

In Mr Kilic’s experience, an in-house bank structure and multicurrency accounts can also be effective cash management tools. “They may be the best alternatives to notional pooling, but it is not easy to create these structures. They take much time, effort and resources,” he says.

He believes that these new structures will be another component of more comprehensive solutions in combination with, for example, virtual account management, but still with classical pooling techniques. “The ideal solution for a customer will remain a mix of different components, but OBO will become increasingly important,” he says.

Having visibility and control over cash flows is an important component of effective liquidity management, but the current operating environment has pushed another issue to the fore: where can corporates put their excess cash?

In answer, Deutsche Bank encourages corporates to revisit their investment criteria. “It is important for treasurers to evaluate their risk appetite and explore wider investment options, otherwise they are going to be in a situation with money on account that is suboptimal,” says Ms Rossi.

She believes that mutual funds and money market funds (MMFs) are viable investment alternatives to deposits. “In the US, MMFs are much more widely accepted, whereas Europe is now seeing greater interest – treasurers are more aware and better educated about them,” she adds.

“LIS lets customers do what they do best – choose investments and set parameters – without having to worry about execution,” says Ms Doherty. “Our product is not about the investment itself, but about connecting clients to the investments of their choice.”

More stories from this section

Transaction Banking Awards 2016 After Bangladesh: why collaboration is the key to fighting cyber crime The brave and brilliant new world of Fintech 3.0 Why are there so few women in fintech? The irresistible rise of Chinese fintech DBS innovation chief looks towards invisible banking