Loading...
Home / Mentions /  Risk is the Name of the Game 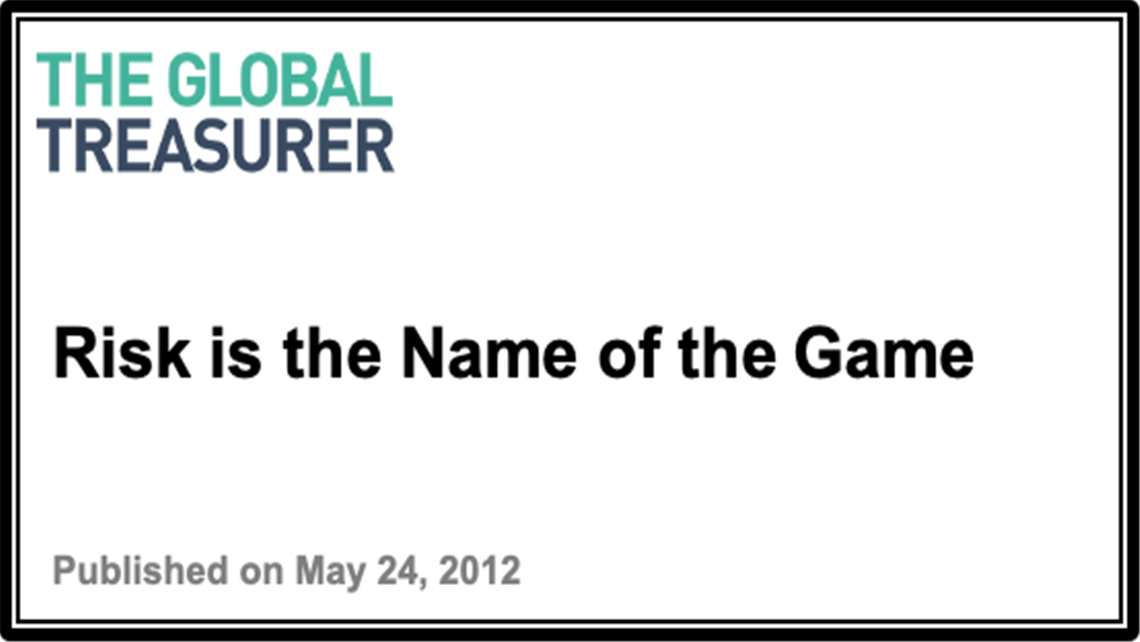 Risk is the Name of the Game

Explained how the vision reshaped the treasury and redefined risks before the financial crisis in 2008. Published on gtnews.com site on May 24, 2012.

The main theme of the Forum for Global Corporate Treasury was risk, plain and not so simple. Corporate treasurers remits are stretching well beyond their comfort zones and into areas of risk that they never had to deal with before, whether that is due to the eurozone crisis, the downgrading of their banks and also more operational type risk.

The Forum for Global Corporate Treasury 2012 opened with an interesting keynote presentation from Conception Alonso, principal economist at the European Central Bank (ECB), who spoke about the bank’s role in stemming the worst effects of the crisis by pumping in over €1 trillion (see The Forum for Global Corporate Treasury : Show Report: The Eurozone and Beyond - Part 1). Alonso and chair of the Forum, Peter van Rood from AkzoNobel, set the scene for the main theme of the day: how to manage and control risk, which seems to be coming at corporate treasurers from al directions.

The eurozone crisis discussion paved the way to the first workshop entitled ‘Sovereign Credit Ratings in the Eurozone’, led off by Frank Gill, senior director, sovereign ratings group, Standard and Poor's (S&P). After charting the number of European sovereign downgrades that have happened in the past few months and followed by bank downgrades, he pointed out that without moving more rapidly towards a fiscal union, beyond just a monetary union, it will be impossible to make a clear distinction between sovereign and bank ratings.

He also described the five main factors that contributed to an S&P rating:

Interestingly, Gill argued that S&P was presently “more constructive” than the market, whereas the he believes that the market is exaggerating the potential risk. He believes that the eurozone countries will not just walk away from the project but will do everything to make the union work.

Risk Management: What Keeps You Up at Night?

In the second set of workshops, three corporate treasury practitioners grappled with the wide array of risks that they and their peers face. Daniela Sibille, director, treasury manager, Europe, Middle East and Africa (EMEA), SunGard Corporate Treasury, said that in the past five years her view of risk has changed and developed. Liquidity risk kept her awake at night, as SunGard operates in more than 100 countries and her job is to ensure that cash is available when and where it is needed.

Sibille highlighted the issue that many corporate treasurers face, particularly those whose companies are quite aggressive in acquiring other companies. “Five years ago it was relatively easy to get banks to fund acquisitions, but that is not the case today,” she said. “Today, we sweep all our funds to London. But as we expanded into new countries, we found that it is not that simple to move cash out of these regions.”

Although SunGard does not face supply chain risk due to the nature of its financial services and software business, it does face a double whammy in terms of counterparty risk, as its 10 biggest clients are also its main banking partners. Sibille found it difficult to assess counterparty risk and was not convinced that credit ratings agencies (CRAs) were that useful for this purpose.

Keara Killian, director, treasury and risk management and EMEA treasury, Getty Images, faces a very specific type of risk as Getty employs hundreds of photographers across the world, many in war-torn or conflict zones. The company deals with the risks associated with kidnappings or injuries, including deaths, of its photographers through captive insurance companies.

Mustafa Kilic, head of regional treasury and group risk and insurance manager at Indesit, which makes home appliances, explained how his team reshaped treasury and redefined risk before the financial crisis in 2008. He asked the company’s executives what risks they were concerned about and got hundreds of answers, which led him to believe that no one in the company was sleeping at night. He explained that there is a need to classify and categorise risk, as well as understand the interdependencies.

“Risk management should see ahead, before ‘black swans’ are coming,” he explained and asked the attendees whether they had been warned of new threats coming down the pipeline by the risk management team - only a few treasurers said yes. He argued that to identify risk teams need key risk indicators (KRIs) instead of key performance indicators (KPIs).

Kilic explained that KRIs are “triggering items” hidden under the radar that could have a profound effect on liquidity risk, for example. These risks are interdependent and could have a domino affect much later on, such as a natural disaster like an earthquake, or a competitor taking marketshare from your company. These risks can be managed and planned for, and he advocated that all should look at updating their business continuity plan. When speaking to gtnews before the panel, he explained that a liquidity crunch is really the end of a chain of other unmitigated or unrecognised risks.

The Challenges of Short-term Cash Investing

The final plenary of the day took up the issue of liquidity again, from the angle of short-term investments. Money market funds (MMFs), and in particular government MMFs, were the instruments of choice for Séverine Le Blévennec, director, EMEA treasury, Honeywell, as bank deposits became less available. She also uses tri-party repos and fixed income securities.

All the short-term investment instruments used by Le Blévennec must comply with the investment committee’s policy. To be able to use tri-party repos, she had to build a solid business case and argue for a change in the investment guidelines.

Le Blévennec said that she is always looking for the “sweet spot between liquidity risk and return”. Michel Bekkers, group treasurer, adidas, agreed with her, saying that it was a difficult balance to strike - especially since the price of the preservation of capital may mean negative yield. “Yield is not a driver in this situation,” he said, “only a secondary consideration.”