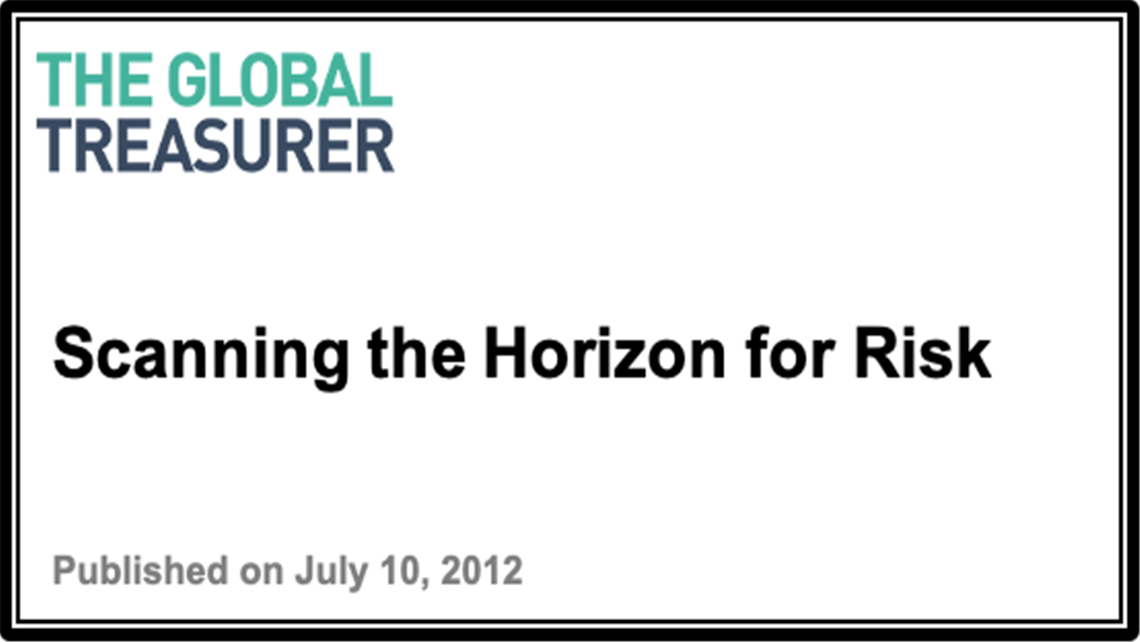 Scanning the Horizon for Risk

Spoke to Neil Ainger at gtnews about why he is constantly scanning the horizon for risk, the need for better, more comprehensive risk assessments, and the lessons he has learned during his 20-year career. Published on theglobaltreasurer.com on July 2012

Mustafa Kilic, head of regional treasury, and group risk and insurance manager at the home appliances manufacturer Indesit, spoke to Neil Ainger at gtnews recently about why he is constantly scanning the horizon for risk, the need for better, more comprehensive risk assessments, and the lessons he has learned during his 20-year career.

“You have to see risk before it arrives, that is the point of the function. It’s no good seeing it after the fact,” says Mustafa Kilic, head of regional treasury, and group risk and insurance manager, discussing one of the key elements of his job, alongside the traditional cash management duties of a treasurer.

His company Indesit, a white good manufacturer headquartered in Italy that makes and sells home appliances in 105 countries around the world, understands risk well having instituted a wide-ranging and comprehensive business continuity risk programme in 2009 that identified a sole Asian supplier of a single refrigerated cooling part as an unacceptable supply chain risk. Action was taken to mitigate this risk by diversifying production to a second Latin American-based supplier in 2009, before the devastating Japanese earthquake hit in 2011 temporarily knocking out the original supplier. Good planning averted disaster before it happened.

Indesit, which has revenues of €2.8bn and employs 16,000 people around the world, seeks to identify all the elements that could impact the health of the firm in its on-going business continuity risk programme, not just particular liquidity or currency risk threats in certain parts of the globe. The idea is that by broadening the treasury-controlled risk function away from its traditional specific concerns around interest rates, currency fluctuations and the like, the corporation can be ‘future-proofed’ as much as is humanly possible and gain a better oversight of allthe risks facing the corporation.

Kilic was the driving force behind the start of this philosophy at Indesit in 2009 when the on-going yearly business continuity risk programme was started, partly as a result of seeing what the earthquake earlier that year in Italy had done to some other manufacturers’ supply chains and operations, if not Indesit’s. Kilic has been with the corporation since early 2004, slowly building towards the establishment of this comprehensive risk assessment procedure after previously spending 13 years in the finance and risk management field at Siemens, Nestle, Motorola and Vodafone, before moving fully into treasury.

He is an advocate of the holistic risk approach for many reasons but admits it is partly from his experience of working at Motorola in the early 1990s and seeing it displaced by Nokia, who have themselves now been supplanted by Apple as the world’s premier mobile phone manufacturer.

“The point is that so-called ‘black swans’ can be identified if you are looking for them and constantly assessing threats, weaknesses, future income streams and planning, planning , planning,” says Kilic. “I believe the traditional approach to risk needs to change and it needs to become much more dynamic. As corporate treasurers we must focus on the future more and build up systems and structures that predict problems, and identify possible solutions, before they occur.”

Strong business continuity risk plans should not just rely on good IT people and human resources staff, believes Kilic. Indeed these departments are not related to the entirety of a corporation because they do not necessarily talk to all employees or understand precisely who the partners in a supply chain are. “Treasury can do comprehensive financial and other risk assessments because we touch all parts of the business internally and externally.”

There is a need to classify and categorise risk and to understand the interdependencies of how different risk factors overlap and impact each other, believes Kilic. “I look after risk at Indesit group-wide and examine everything from counterparty risk, to foreign exchange [FX] risk, supply chain, credit risk and so forth. Before 2009 we were focused too much on financial risk at Indesit, which is of course vital, but it is not an isolated risk. Risk is interdependent and we didn’t use to understand that well enough. A liquidity crunch is really the end of a chain of unmitigated or unrecognised risks. Conversely, effective foresight and business continuity risk planning - and I don’t just mean the technical aspects of keeping a business running here - pay off in the long term.”

Indesit has 14 production facilities in Italy, Poland, the UK, Russia and Turkey and 16,000 employees to pay, as well as revenues from around the world to accumulate, so of course traditional cash management, FX risk and so forth are key concerns and a part of Kilic’s job. Liquidity risk is an especial concern at the moment for obvious reasons with the eurozone crisis and the economic downturn,” he admits, “but being aware of the domino effect of different risk factors and the interplay between them, allows you to be better prepared to deal with particular challenges as they arise.”

Each and every corporation has different risks, which is why Kilic thinks that drawing up an interdependency map, as Indesit did in 2009 and now does every year, is a good idea. “It allows you to see potential problems well into the future and to plan effectively,” he says. “You then need to develop a business continuity risk plan from this base, as we do, and to test this plan as much as possible. You may need to diversify so you are not reliant on a single supplier [as Indesit did for its refrigerated cooling part before the Japanese earthquake struck]. In our map one natural disaster could have triggered 16 other risks. As this single component fell away our manufacturing plants in and around Europe would have been negatively impacted, hitting our distribution, retailing partners and so forth.

“Insurance doesn’t cover everything, in all instances, but effective planning can mean that it doesn’t have to,” he adds. “It is time that everyone started doing interdependency maps and business continuity risk planning.”

Of course, treasurers with risk responsibilities such as Kilic - and risk is increasingly part of the job these days - need to convince others in their corporation, the board, and partners in the supply chain to join in with any comprehensive risk mapping and testing structures that are put in place. Kilic had the help of two other people at Indesit when establishing the procedure that the corporation now regularly uses, plus the assistance of some external consultants. Teamwork is a vital component in business continuity risk planning.

One crucial element that Kilic found very helpful in the early stages of implementing any such programme is the development of what he calls ‘key risk indicators’ (KRIs), as opposed to what are traditionally known as key performance indicators. “These triggering items are often under the radar but if they are activated - by a natural disaster, a currency collapse or whatever - then they quickly come to the surface. Identifying KRIs and working out possible solutions before the problems arise, helps to nullify the risk.”

In terms of the immediate risks that Kilic sees on the horizon now it is economic and financial risks that are worrying him at the moment, due to the present downturn and the volatility of markets and currencies. Other future risks are simultaneously being assessed at Indesit, however, to try to ‘future proof’ and protect the corporation. Nothing lasts for ever they say, but as much as it is possible effective risk planning can extend the life and health of corporations.

Read the interview at the link attached