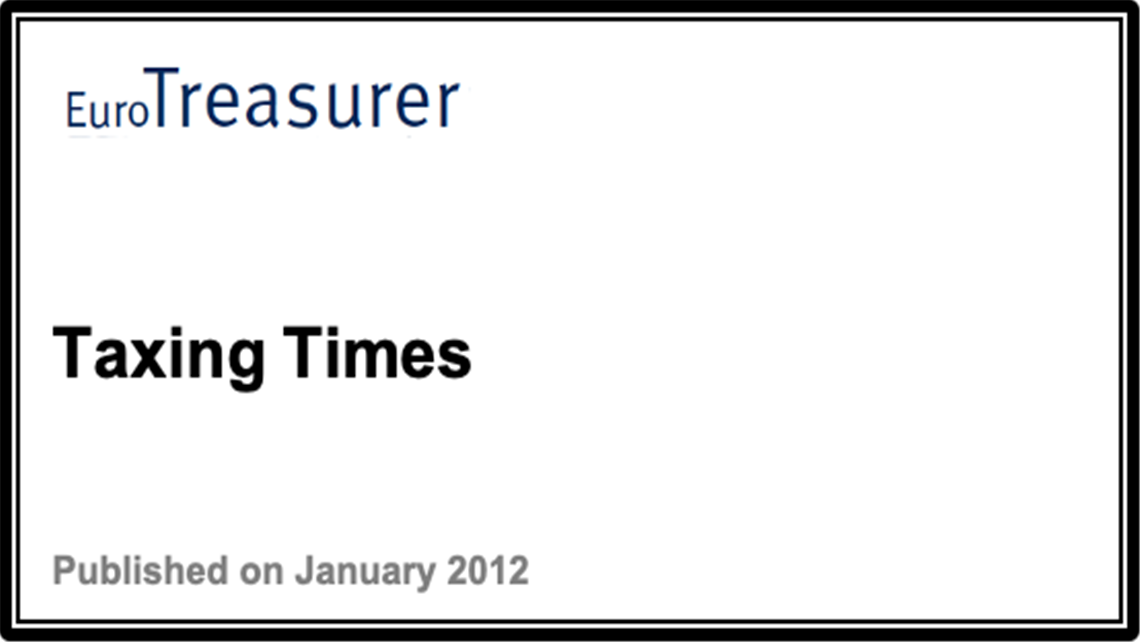 Mentioned about the impact of the proposed financial transaction tax. Published on Euro Treasurer Magazine on January 2012 issue.

The prospect of a European financial transaction tax (FTT) continues to divide Europe. Wolfgang Schäuble and François Baroin, the German and French finance ministers, met on 12 January to discuss the tax – a day after Italy’s prime minister expressed support for the proposals. However, enthusiasm for the proposed levy is far from universal. Whereas the European Commission estimates that the tax would raise EUR 37 billion a year, Ernst & Young recently suggested that the tax could in fact lead to a net loss of between EUR 2 and 116 billion due to reduced revenue from other taxes. A number of EU states are opposing the tax, including the UK and Malta. “There are mixed views about the proposed financial transaction tax,” comments Beate Murray, Head of Global Treasury Solutions for Germany, Austria and Switzerland at Bank of America Merrill Lynch. “Some treasurers fear it may trigger a decline in asset values and an increase in the cost of raising capital. Some customers fear that the costs will be passed onto them” (see article to right). Mustafa Kilic, Head of Regional Treasury, Group Insurance & Risk Management at Indesit, is concerned: “As a treasurer, I’m a bit worried about the prospect of having to pay more for all financial transactions. Ours is not a high margin industry and our biggest competitors are in the US and Asia, where the tax wouldn’t apply – so the proposed tax could put us at a competitive disadvantage.”

According to new Oliver Wyman research, a financial transaction tax (FTT) would seriously impact the FX markets, increasing transaction costs for corporations anywhere from three to eightfold and by up to 18 times in individual cases. Under the current proposal, derivative transactions like swaps, forwards and options are to be charged at a minimum rate of 0.01 percent of the notional value traded to both the end-user and the dealer. The cost of a one week euro/ US dollar swap with a notional value of EUR 25 million would increase from EUR 279 to EUR 2,779 for an end-user. The total overall costs of such a transaction – meaning to the end-user plus dealer – would increase to EUR 5,279. An FTT would also have a significant secondary impact, namely, a potential reduction in liquidity leading to a widening of bid/ask spreads, which could thereby increase indirect transaction costs by up to an additional 110 percent.