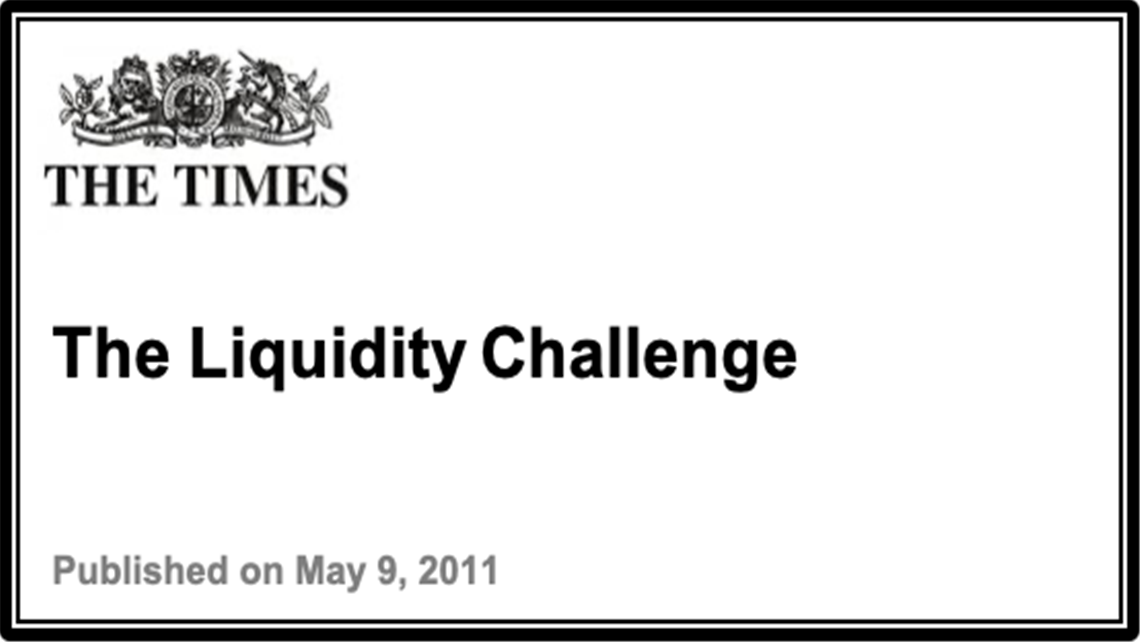 Spoke to Heather McKenzie from the Times About the current cashflow lending conditions and treasurers reactions including my insights about “The Liquidity Challenge” and our own innovations. Published on The Times Corporate Treasury Supplement on May 9, 2011.

Cashflow Lending is still at low levels, which is forcing treasurers to become more innovative. Increasingly, technology is coming to the rescue, writes Heather McKenzie

Despite efforts to encourage greater lending by banks to businesses, liquidity remains tight. Official data in the Bank of England’s Trends in Lending report for April 2011 revealed that lending by all UKresident banks and building societies had fallen by around £5 billion in the three months to February 2011.

The scarcity and expense of liquidity is forcing corporate treasurers to seek alternative sources of funding – many of them internal – and has led to a greater emphasis on the management of liquidity and working capital (typically defined as current assets minus current liabilities).

Exactly how a corporate treasury manages its liquidity will depend on the nature of the business – whether it is cash rich or poor, the industry in which it operates and the size of the company itself. “Some very large multinational companies don’t have liquidity problems because the banks want to do business with them,” says David Kelin, London-based partner at Dutch treasury consultancy company Zanders. “But many medium and small sized companies, and even some large ones, are struggling with their banking relationships in terms of who wants to do business with them, and who they want to do business with.”

Traditional cash sweeping and cash pooling products are gaining in importance, he says. “These products deliver visibility of cash, which is crucial for companies that work with many different banks and bank accounts.”

Kelin says cash flow forecasting is increasingly seen by corporate treasurers as a crucial way of gaining control over their cash and managing it. Forecasting enables treasurers to estimate the timing and amounts of cash inflows and outflows over a specific period. It will indicate when a firm needs to borrow, how much, and when and how it can repay the loan.

“You cannot half-do forecasting,” warns Kelin. “It must be done properly because if it is wrong, a company might invest money it doesn’t have or borrow money externally that it doesn’t need. There is a real cost to  getting it wrong and for this reason, some companies don’t forecast.”

Technology is playing a role in improving forecasting and treasury operations in general. Tim Allison, group treasurer at business and technology service company Logica, says technology is providing greater visibility of liquidity for treasurers. “We are making more use of electronic banking systems, which enable us to see intraday movements of cash. This visibility is very helpful and brings significant benefits in being able to forecast in the very short term. For short to medium forecasting we also make greater use of online reporting tools. Here the benefit is faster, easier and more robust cash flow forecasting across multiple countries.”

Logica’s cash management focus is to pay off short-term debt as fast as possible and to achieve this the company has moved from manual sweeping of cash balances to an automated system, says Allison. The company has set up a network of automatic cash pools in its main European countries, but has not opted to set up a single pan-European cash pool. “Implementing cash pooling across borders in Europe is difficult and we felt we could benefit more immediately from splitting cash pooling into manageable chunks. This has proved to be the case and we are able to show progress on our cash pooling that probably wouldn’t have been the case if we had tried to implement a pan-European structure,” he says.

With operations in 180 markets, British American Tobacco’s (BAT’s) treasury seeks visibility in “as close to real time as possible” throughout the group, says Valeriy Zubkov, treasury controller at the company’s London operations. During the past few years BAT has been rolling out a global system to forecast cash, which provides the foundation for treasury decisions regarding risk and foreign exchange management, as well as investment and borrowing.

“The focus for us as a treasury group is to match the requirements of the business for cash with the ability of the centre to raise cash in the right currency at the right time and deliver it to the right place,” says Zubkov. BAT’s treasury centre in London acts like a clearing house, he adds.

In order to get cash from BAT’s different operations into the centre as quickly as possible, the treasury uses cash pooling structures. One in Europe covers most of Western Europe and some Eastern European countries and another in Singapore covers Asia Pacific. “We are using traditional skills, sweeping our balances into the centre in our two dealing rooms, so we can trade with external counterparties. In a few countries where it is difficult to repatriate cash, we have set up notional pooling structures. Sometimes you have to be more creative in getting cash back into the centre,” says Zubkov.

Creativity is at the centre of household goods manufacturer Indesit’s pooling arrangements. Indesit is the second largest manufacturer of white goods in Europe and the fifth largest in the world. It has operations in 29 countries and runs a central treasury as well as regional treasuries, although the company is currently trying to centralise as much treasury activity as possible.

“During the past three to four years Indesit has transformed its treasury operations, establishing many new models and instruments,” says Mustafa Kilic, regional treasury and group insurance manager, group treasury at Indesit.

Among these new instruments is a hybrid pooling structure, which has improved the treasury’s efficiency and eliminated the need for many inter-company loans, says Kilic. He describes it as two engines – cash concentration and notional pooling – coming together to create one product. The system offsets credit balances in one currency against debit balances in another. Unlike physical cash pooling, Indesit’s hybrid approach doesn’t require the physical conversion of the currencies and movement of funds once the balances are concentrated in the header accounts. The funds remain in the name of the different legal entities, thus eliminating inter-company loans and the associated administrative burden. Cross-currency notional pooling, while also not requiring the physical movement of funds, does require set-off agreements.

Treasurers are increasingly looking to alternative sources of liquidity, says Enrico Camerinelli, a senior analyst within the banking group at research and consulting firm Celent. “Rather than looking at traditional areas of liquidity such as financial markets and financial institutions, corporate treasurers are looking internally at working capital aspects such as payables, receivables and inventory.”

A number of different approaches are being taken, he says. For example, some companies are looking to delay payments to suppliers in order to finance the operations of other parts of the company. This has led to greater co-operation between the treasury and procurement departments within companies.

Cash rich companies are also changing their approach, particularly as bank deposits are attracting such low interest. “Large companies with enough cash are using that liquidity to finance their suppliers,” says Camerinelli. “Companies that rely on suppliers of strategic components want to make sure these companies don’t go out of business, particularly during times when borrowing costs are so high.”

These companies are using techniques such as reverse factoring or payables discounting to ensure continuity of supply from smaller companies. “Many corporate treasuries see more value in building a pool of funds and giving that to the supplier, rather than paying the same amount of liquidity into a bank deposit,” says Camerinelli.

One of the positive outcomes of the financial crisis, says Indesit’s Kilic, is a greater focus among corporate treasurers on internal treasury efficiency. “I and my colleagues in the treasury world have looked for solutions to increase efficiency so we are not longer as dependent on banks for liquidity.”