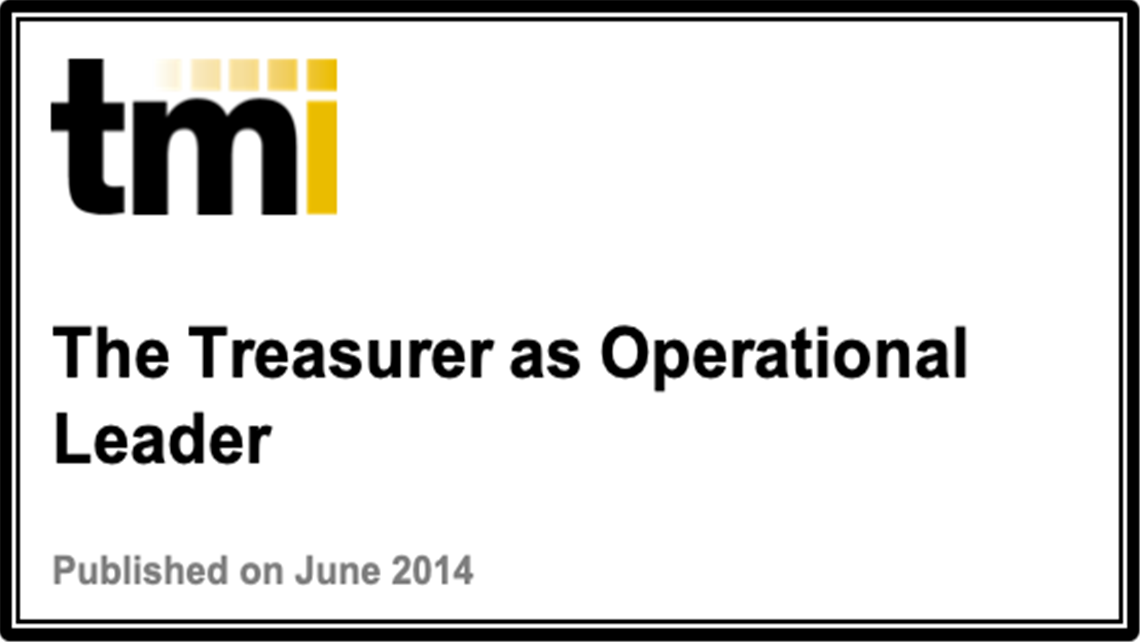 The Treasurer as Operational Leader

The role of the treasurer took pride of place in discussions on the second day of BNP Paribas’ Cash Management University event with contributions from both treasurers and a chief financial officer (CFO). Published on Treasury Management International Magazine on June 2014

The role of the treasurer took pride of place in discussions on the second day of BNP Paribas’ Cash Management University, with contributions from both treasurers and a chief financial officer (CFO).

Day two of the 7th BNP Paribas Cash Management University began with a series of concurrent workshops covering a variety of key treasury topics. Once the attendees came back together in the main plenary room, they were initially put to work to design a new treasury dashboard, with the different tables of delegates competing to come up with the perfect design to suit the needs of treasurers.

While no winners were announced on the day, this attendee would personally be very surprised if the bank doesn’t launch a treasury dashboard in the near future that looks suspiciously like the design arrived at by those on table 8 - all present agreed they would be very happy to sell this concept to BNP Paribas for a reasonable fee.

Once the fun of treasury dashboard design challenge was over, event moderator Lorraine Dauleux welcomed John Durcan, Europe, the Middle East and Africa (EMEA) treasurer with advertising and PR giant WPP and Parv Gill, Europe region treasury director at logistics group UPS, onto the stage to discuss how the role of the treasurer has changed over the past few years.

Durcan noted that the world itself is changing at an enormous pace through globalisation, and said he is managing more exposures. He described his two tempos of working as ‘Usain Bolt pace and Superman pace’. The Usain Bolt pace is what Durcan uses for his core markets. WPP has a multi-currency cash pool covering Asia-Pacific, mainland Europe, the UK and the US. The treasury pool represents approximately 95% of what is available to be pooled, starting in Asia and following on across Europe, the UK and finally the US where the position is centralised. This gives the company flexibility to pay down debt, for example.

With regard to different regions and markets in the world, Durcan said that if financial professionals get the old markets wrong then they could forget the new ones. Once you have your core markets managed well, you are then ready to take on the challenges and opportunities that the emerging markets (EMs) have to offer. Africa might be the world’s fastest growing region, but there are serious challenges here. Durcan highlighted events such as the Arab Spring across parts of northern Africa and currency controls in Egypt as examples. In Kenya, he told the story that every time he went near the shilling (KES) market, he moved it. This illustrates the need to run at the Superman tempo in EMs.

Parv explained that his treasury team had succeeded in becoming the banker for the business, having gone through a rationalisation programme, centralising treasury and establishing shared service centres (SSCs), for example. However, regulations such as the Single Euro Payments Area (SEPA), the European Market Infrastructure Regulation (EMIR) and Dodd-Frank then hit. These have made Parv re-evaluate the position of his treasury and what it can do to get a better handle on these external forces. He said that UPS has not yet looked at setting up an in-house bank (IHB), or functions such as payments on behalf or collections on behalf (POBO/COBO), but these are all on the horizon.

Parv provided an example of how treasurers have to be able to adapt to everyday life. He explained how UPS is a very cash-intensive business. The company picks up large volumes of cash from its customers, which drivers bring back to the centres where it is then counted, passed back to the bank and deposited. He recounted how he began receiving calls about a problem with the Italian operation, and it became clear that there was an issue with picking up cash from that centre. The company was using a cash in transit (CIT) provider, and the trouble was that some of the cash was going missing, largely because it had so many touch points along the way.

While Parv explained that he initially had no intention of resorting to a request for proposal (RFP) for the business, with many other competing issues last year he had no choice but to do so and it was put out to tender. Most banks can offer ‘plain vanilla’ solutions that are usually largely similar. Faced with this specific problem, Parv and his team were looking for those banks that can offer value-added solutions. Through the process, a number of banks proposed a ‘cash in’ service solution that was new to the Italian market. Parv said that UPS ultimately chose BNP Paribas and were the first in the market to implement this solution.

The company installed a type of safe that is connected directly to the bank’s systems. Drivers use a swipe card that identifies them to the safe and they then deposit the cash.

The safe counts the cash, recognises what notes have been deposited, and provides the driver with a receipt that is date-stamped with the time the cash was deposited and who it relates to.

Gill noted that this feature is a key benefit for UPS, as now nobody else needs to touch the cash, whereas in the past it was touched by cashiers or held in petty cash for a while. Then the CIT provider comes in - who is not part of UPS but is contracted in co-ordination with the bank - and can use the unique pin service to access the cash in the safe. Once they enter their pin, the safe gives them a receipt specific to how much cash is in the bag they are about to collect. They then post the receipt back into the safe, which is sealed into the bag. This is important, as it means there is no touching of the cash by anyone involved in the change. Another key point for Parv is that he gets same-day value from this cash - as soon as it goes into the machine it is connected with the BNP Paribas system.

Mustafa Kilic, CFO and member of the board at domestic appliance manufacturer Candy Hoover Group, was next on stage, providing some thoughts about treasury from the CFO perspective. Having previously worked as a treasurer before making the leap to CFO, he explained that as CFO he keeps his treasury hat on but also extends his responsibilities further into other areas, particularly risk management, which Kilic described as a top priority. Coming from the treasury, another area that is key to his CFO agenda is efficiency.

Kilic pointed out that he also has to be close to the shareholder’s perspective for the business. He quoted a recent survey from Euromoney that described how treasurers report that they contribute to the business most in the areas of cash and liquidity management, while shareholders believe treasurers should contribute most to risk management. This is one of the reasons why risk management is such a big priority for the CFO, he suggested.

Treasury is evolving at a quicker rate than other areas of the business, according to Kilic. He pointed out the many elements to the job of the treasurer today, commenting that SSCs) are affecting and changing the role of treasury. Other elements such as automation, regulation and risk are changing the expectations of the treasurer from shareholders and colleagues within the business.

Looking to the future, Kilic identified the issue of pensions, particularly in Europe, as another issue that the treasurer will eventually have to manage and coordinate. He concluded by saying that he misses being a treasurer, particularly because today the treasury role is becoming much more operational. This suggests there is real value here for the profession if it can be seen as a fulfilling, long-term career rather than merely ‘another box to tick’ in the pursuit of a CFO role somewhere. By becoming closer to the business and the key decisions that are made at board level, the dynamic nature of treasury roles can help retain key talent in the function

Elements such as automation, regulation and risk are changing the expectations of the treasurer from shareholders and colleagues within the business.