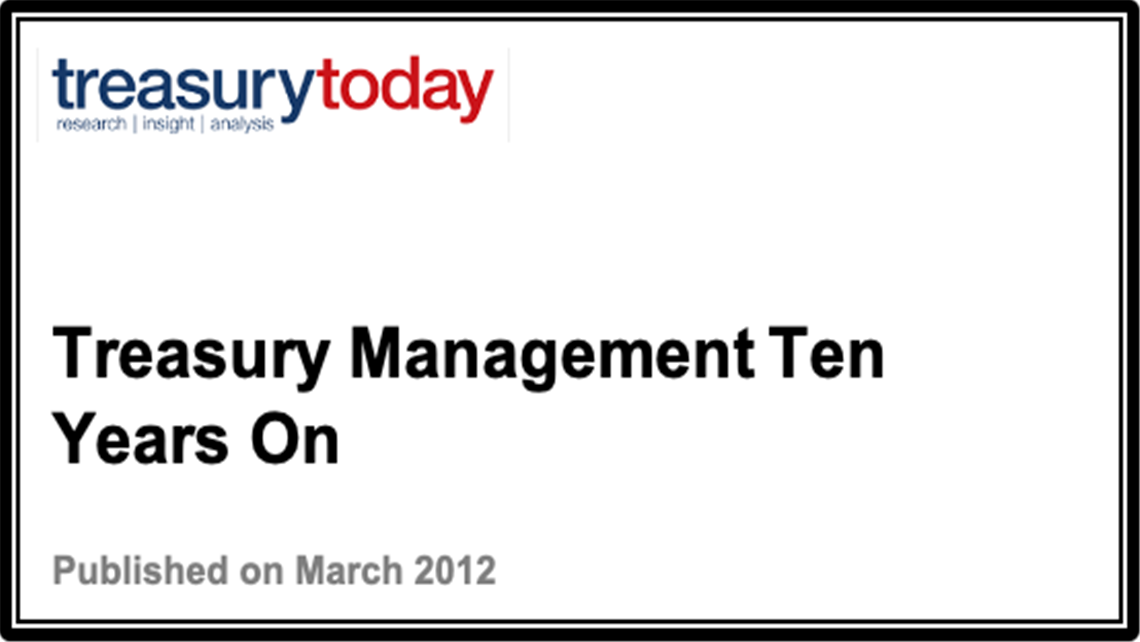 Discussed and commented about the evolution of the treasury management. Published on Treasury Today on March 2012 issue

Ten years is a long time in treasury. What have been the major breakthroughs in the last decade? Try and think back to 2002. Companies were still recovering from the dot-com bubble; euro notes and coins had just been introduced; and acronyms such as CDS and CDO had yet to enter the lexicon of every treasury team, let alone the man on the street.

Treasury technology has played an instrumental role in ramping up the speed. Payment and cash management systems, in particular, have undergone significant advances. “We no longer have to worry about modem connections each morning,” says Chris Corner, Treasurer at BBC Worldwide. “Having immediate online access to our real-time bank account information is very welcome.”

Since the financial crisis, company boards have taken an active interest in the cash flow and liquidity of the business. As a result they often come knocking on the door of the treasury department.

“I think especially within last three years our priorities have been changed and now we see more risk oriented treasurers around,” says Mustafa Kilic, Regional Treasury and Group Insurance Manager at Indesit. “Technology has been one of the most important players in the treasury world, but risk concerns are now more dominant in defining the agenda. Companies are certainly paying more attention to their treasury department and investing more than before.”

Recently, treasurers have also been forced to become more inventive when it comes to securing funding and liquidity for the business. “One major aspect that has changed since 2002 is the ability to access investors directly,” says Wyllie.

“With technology, communications are coming more to the fore, corporates now have the ability to build up databases of all their investors so that they can do private placements directly and connect to debt investors.”

“We may see over the next five to ten years disintermediation from the banks. It is becoming more plausible and feasible,” Wyllie adds. “Once corporates have their basic prospectus together, and their basic legal due diligence, they can start to issue debt and equity. Corporates are starting to realise that they don’t need banks to get that together for them.”

So it seems that treasurers have become more assertive and independent. But there have been some disappointments along the way. For instance since 2002 eBAM has – by and large – failed to live up to its promise. Treasurers have also been frustrated by the slow progress of SEPA. But these setbacks are not stopping treasury from becoming ever more in the limelight.

According to Corner, the main breakthrough for treasury has been its increased profile in the corporate world. “Treasury has definitely become more popular,” says Corner. “Whether it is the number of students at ACT exams, the number of attendees at corporate treasury events, or the amount of applicants for position. I am recruiting at BBC Worldwide – all these have increased.”

This increased popularity is just part and parcel of the treasury function taking on a more visible role in the business, Corner argues. A decade ago many people moved into treasury positions from an accounting role in the same company. This is no longer the case. Graduates, amongst others,appreciate the role of treasury with many making it their conscious career choice after leaving the college gates.

So yes, a lot can happen in a decade. Treasurers can now avail of faster technology; risk management has taken on a heightened importance; and the treasurer is more visible and active than ever before. But, in some respects, treasury remains the same old job – and rightly so.

Recalling his days as a young(er) treasurer, Wyllie notes: “I used to work with a mentor who always had a fantastic phrase, ‘Treasury isn’t about return on capital, it is about return of capital’. That still holds very true today, no matter how much technology is in place.”