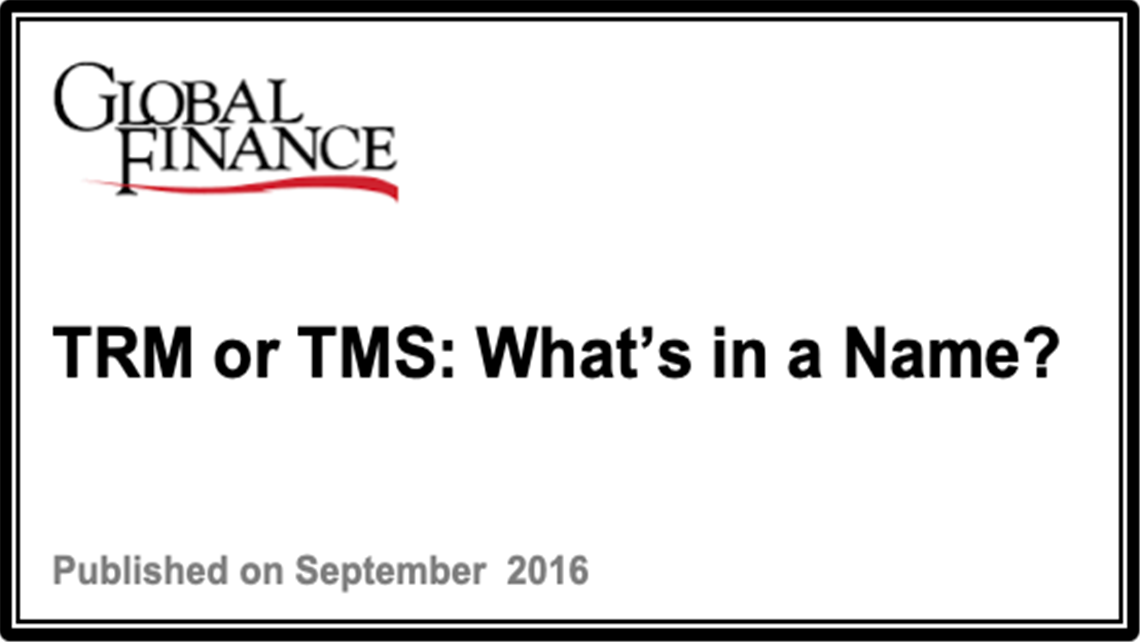 Spoke to Neil AINGER from Global Finance Magazine about the Treasury & Risk Management Systems and preferences of the corporates.

Once upon a time, a treasury management system (TMS) was enough for a multinational corporation wanting to consolidate its treasury operations and introduce more automation, tracking and technology to support operational centralization. But increasingly, treasury and risk management (TRM) solutions are wanted instead, as treasuries become more eager to mitigate, track and report on their risk while complying with a raft of new regulations.

Corporate treasury departments have always been attuned to risk, according to Michael Connolly, former chair of the Investment Committee for Jewelers of America and treasurer at Tiffany & Co. But more recently, awareness has spread to other decision-makers. “Boards, executives and colleagues are now more risk-aware,” says Connolly. “Therefore, treasury’s challenge has expanded to explaining risks and mitigation strategies to a broader audience.”

A TRM can help in this reporting duty, but Connolly, who chaired the Association for Financial Professionals board of directors in the US from 2010‒2012, is not convinced the addition of advanced risk metrics and automated risk reporting to the traditional cash and liquidity management functions of a TMS is anything more than a marketing ploy.

“The ‘new’ technology is more of a repackaging than anything else,” he says, noting that risk data alerts and other associated capabilities can be added to traditional TMS platforms as bolt-ons.

Mustafa Kilic, chief financial officer at Groupe SEB, a French appliance maker of Moulinex, Tefal and other brands, disagrees. “Honestly, there are some differences,” says the Istanbul-based professional. “TMSs generally don’t have the pre-installed links to key risk indicators that treasurers want. Traditionally, they have key performance indicators instead, but nowadays we want in-built, integrated risk metrics too. In my opinion TRMs are a welcome development.”

Looking at the history of the TRM name helps gauge its value. Reval started using the term in 2011 when it added cash and liquidity management (previously the forte of TMS) to its preexisting financial risk management and hedge accounting software-as-a-service platform. The firm was founded in 1999 as a way to help corporates account for derivatives under the new US Financial Accounting Standards Board regulation, which stipulated that trades involving derivatives had to come onto the balance sheet. This resulted in profit and loss volatility and corporate restatements.

Reval’s move into the TMS arena used the TRM name to make it stand out—with a product to meet corporate demands for an all-in-one risk, cash, liquidity and compliance. According to Justin Brimfield,  Reval’s chief marketing officer, it was also “a direct reflection of the market’s move toward risk.”

“It is hard and expensive to build out corporate risk management capabilities and associated reporting,” he adds.

Kyriba uses TMS and TRM inter-changeably. “Both terms describe our solution. TRM isn’t a registered or nonregistered trademark, so anyone can use it,” says Bob Stark, Kyriba’s vice president of strategy. “I wouldn’t say TRM is as widespread a term among corporates. It is less popular than TMS—even for treasurers seeking advanced risk management and hedging solutions.”

Further integration is available, however, claims Bloomberg, which launched its own Bloomberg TRM branded treasury technology in 2014, aligning it with its preexisting data and news provision. The use of the TRM name is telling and emphasizes the risk focus. “Our offering has a fully integrated risk capability leveraging Bloomberg’s risk tools, which are used to better identify, monitor and mitigate market risks,” says Bruce Manson, global head of corporate treasury product at Bloomberg.

Thomson Reuters wants in on the act as a similarly global data provider that is also now targeting the treasury and risk management space. As Sanjeev Chatrath, regional Asia-Pacific head of its financial and risk business, says: “Risk management has become a core responsibility for most C-level executives.”

Enrico Camerinelli, senior analyst at Aite Group, advises against getting hung up on the name: “It’s about being able to intercept signs of possible disruptive events and anticipate potential outcomes. A sort of risk portfolio analysis—that’s the key point of a TRM. In principle the shift is rather important, but today, for now, it’s largely cosmetic.”