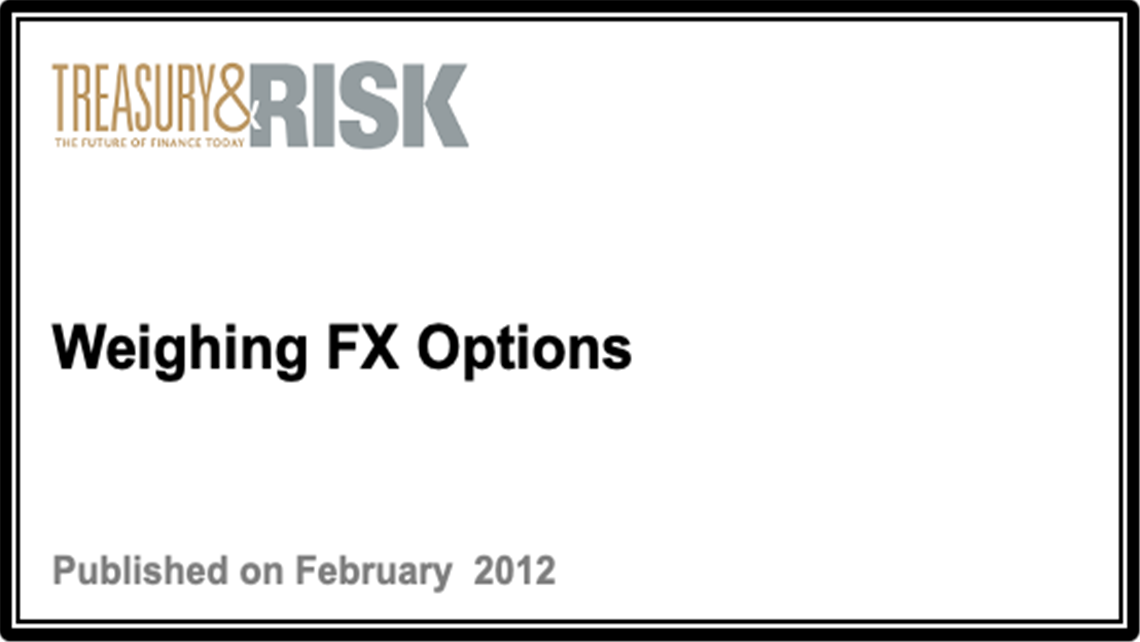 Commented about the post crisis FX strategies while evaluating a possible breakup of the euro. Published on Treasury & Risk on February 2012 issue.

As treasurers in Europe look to shield their companies from a possible breakup of the euro, the argument for using FX options becomes harder to ignore.

Treasurers are no strangers to currency volatility—the events of 2008, when volatility hit unprecedented highs, still feel very recent to most in the industry. But while volatility in the currency markets has generally subsided since then, the prospect of a euro breakup is keeping this topic uppermost in treasurers’ minds.

“Whilst we haven’t seen extreme moves in many markets—euro/dollar has been fairly volatile, but volatile within a range—the concern is what might happen going forward,” says Ross Niland, managing director at J.P. Morgan. “There is an increased focus from corporate treasurers as to where volatility may bring things, as opposed to how volatile the markets have been.”

While many believe the euro will survive in its current form, the prospect of what could happen in the event of a breakup is nevertheless a widespread concern.

“The analysis that our economists have looked at suggests that if the euro were to break up—whether it’s a relatively orderly failure or a disorderly failure, due to the risk of contagion—we could see something like a 25% move in euro/sterling,” says Jeremy Adam, head of FX structuring for Lloyds Bank Corporate Markets. “That sort of movement would be equivalent to the sort of price volatility we were seeing at the height of the financial crisis. We are not seeing that level of price volatility at the moment, but as long as the euro breakup risk remains, the threat of that potential movement is there.”

Bart Jansen, director of treasury and risk management at Coca-Cola Hellenic in Greece, is keeping the current uncertainty in perspective: “From a pure financial risk management point of view, the situation is still not bad as it was in 2008 and the beginning of 2009, when things came to a complete standstill and currencies fell off a cliff,” he says. “This is a more gradual process and not as bad as what we saw then. but things could still get a bit worse before they get better.”

In light of the situation, Jansen says he has intensified the monitoring of FX exposures. “We meet more regularly to review exposures. We have contingency plans in place and we decide whether we want to execute them or not,” he says. “Before events like EU summit meetings, we discuss beforehand what the potential outcome is and put contingency measures in place, if necessary, but we have not changed our models.”

Some treasurers in Europe have gone even further by adjusting their FX hedging activities to fit today’s conditions. Unlike 2008, when the volatility caught people off guard, in 2012 companies are looking to protect themselves against an increase in volatility that may or may not become a reality. In light of this high level of uncertainty, some treasurers are moving away from their traditional reliance on forward FX contracts and beginning to consider the use of options for the first time.

“There is a greater readiness to use FX options for short-term hedging than in the past,” says Bernard Sinniah, managing director and global head of sales for corporate FX at Citi. “Clients move toward currency options when they are not certain of currency direction.”

While FX options may look more attractive in the current market, the use of options does not have to be all or nothing. Lloyds’ Adam says that at the beginning of this year, some new trends were emerging as companies arranged their annual translation risk hedging: “We’ve seen companies look at including more optionality in their hedges,” he says. “So not a complete replacement of forward FX with options, but strategies such as participating forwards and participating collars where companies seek to reduce the amount of sold optionality while at the same time making sure they have purchased enough hedge to cover the forecasted risk.”

The advantage that options bring is clear: Instead of being locked into transacting at a particular exchange rate, as is the case with forwards, the owner of an option can choose whether or not to exercise it at maturity. “You have the opportunity to benefit more when rates start to move to your advantage,” notes Jansen. “You also know what you’ve spent in terms of premium so when you have to mark-to-market your positions, you have less of an impact for mark-to-market volatility than when using forward contracts.”

Options are not only nice to have: They can prove to be less risky than forwards, depending on the direction in which markets

move. “The forward contract can be a very dangerous tool if not used appropriately,” says J.P. Morgan’s Niland. “Post-Lehman, we saw quite a lot of corporate treasurers suffer from forward hedging, given that the underlying cash flows had dropped significantly. If you’re not 100% certain of the underlying cash flows, options can be safer as you’re not locked into the position.”

In addition to the other benefits, Adam points out that options can give the buyer the opportunity to recoup value if the underlying market moves advantageously. “If you buy an FX option, you own an asset that entitles you to flexibility as well as protection,” he says. “Whilst it provides insurance, a favorable movement in the underlying market can offer the opportunity to lock in a better forward-market rate than you could have achieved when you bought the option. Locking in the forward also allows any residual value in the option to be realized.”

Often that’s the most difficult hurdle for corporations to clear, Adam says because “some companies will say that is speculating rather than hedging. A potential analogy is that most people who buy car insurance don’t tend to leave the car in the garage all year—that is not aiming to achieve optimal value for money. Many financial institutions are already over that hurdle and actively seek to deliver optimal value to their business through their hedging programs.”

One company that recently began using options is Italian travel company Alpitour. Although its treasury policy technically permitted options, until recently they had not been used, according to Group Treasurer Enrico Rao. However, in 2011, Alpitour decided to change this, in a move driven by concerns over currency volatility.

“In the last couple of years, the situation has become more difficult,” Rao says. “There is much more volatility, and you have to be careful which instruments you use. If you use something too rigid, like a forward, it can end up costing a lot.”

The transition was undertaken gradually. Alpitour initially used a zero-cost collar before purchasing call options on the U.S. dollar in April. Rao observes that a key step in making the transition was explaining the pros and cons to the commercial side of the business. “The turning point was explaining that with this kind of instrument, you can choose whether or not to use it,” he says. “Of course, in order to have this option in your pocket, you have to pay a premium. We explained that the price is like an insurance contract.”

However, using options has its own challenges. The first is the cost of the premium, which treasurers often see as prohibitive. Complexity is another consideration, according to Sinniah. “Treasurers are cautious about using products that are too complicated or that they don’t understand. The trend of the last couple of years, since the crisis, has been toward lightly structured products,” he says. “So they tend to go for simple structures with low-cost premiums or zero-cost simple options structures.”

Another obstacle to the use of options is the fact that corporations’ treasury policies may prohibit or restrict their use. “Right now there are not that many options that I can use,” says Mustafa Kilic, head of regional treasury, group insurance and risk management at Indesit Co., a European manufacturer of domestic appliances. “The limitations come from the treasury policy. If we want to do options for more than the value stipulated in the policy, we have to get some other approvals, which is not always possible during the course of operations.”

Kilic says that if he were to rewrite treasury policy today, he would look at including more flexibility on this point. Indeed, this is what a number of companies did in the wake of 2008, according to Adam.

“After the financial crisis, many treasurers reviewed their FX risk management policies, having found that conventional forward FX contracts hadn’t necessarily performed as they would have ideally wished,” he says. “Those who have since adapted their policies could be in a better position in the current market if they have built in the potential for more flexible hedging solutions and/or have included additional instruments in their policies.”

While this strategy gives treasurers the flexibility to be able to use instruments such as options, in reality they may not yet have a track record of implementing or using those instruments, Adam says. “Therefore it’s extremely important for their counterpart bank to be showing treasurers what the implications could be, were they to use one instrument versus another for hedging their FX risk,” he adds.

Despite these obstacles, with treasurers in Europe keenly aware of the consequences of a possible breakup of the euro, the argument for using options is becoming harder to ignore.

“If your business can’t afford the FX option premium, there is another question you should ask yourself, which is, can your business afford to be trading cross border and therefore undertaking an FX risk?” Adam says. “After all, the FX premium is a reflection of the market’s perception of the prevailing ‘value’ of FX risk.”

For a look at measures multinationals should be taking given the possibility companies may exit the euro, see Breaking Up the Euro.